Philippe Blanc of Chateau Beychevelle had the best Peking Duck in Singapore on 28 June 2019.

The managing director and chief winemaker of the St-Julien estate was wrapping up a 10-day trip that included tastings and dinners in Hong Kong, Shanghai, Manila, Kuala Lumpur, and Singapore.

Reservations are strongly recommended for Imperial Treasure Super Peking Duck Paragon as it is the hottest restaurant in the shopping mall and on that stretch of Orchard Road.

Together with Albert Chuang, Air France Station Manager at Changi Airport Singapore, the three of us began with several dim sums. The har kow and mushroom dumplings were steamed to perfection. As for the spring roll, that was as crisp as new money notes. 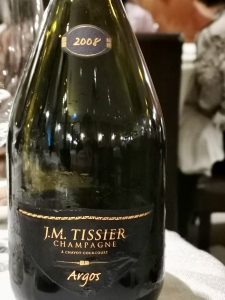 We washed all that down with an outstanding Champagne JM Tissier Argos 2008, a small family producer just outside Epernay. It didn’t take us very long to finish the bubbly. Just in time too because the next course needed a white with more texture.

Produced entirely from the Rhone varietal, Yves Cuilleron Marsanne Les Vignes d’a Cote 2016 is from Chavanay, which is in Auvergne-Rhone-Alpies or ARA, the result of the merger of Auvergne and Rhone-Alpies. The new region came into effect on 1 January 2016.  The northern Rhone specialist has produced a winner. Scented, including with a floral aspect, and with ripe stone fruits. Inspite of its smooth glycerol texture, there is no heaviness in the young white and it went supremely with Garouper Filet Stir Fried with Spring Onion & Ginger. 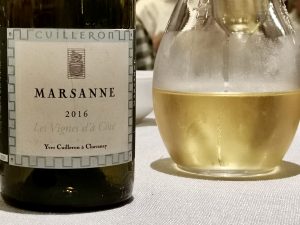 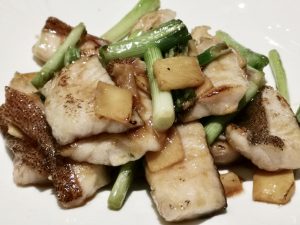 Peking Duck – because of the little sweet sauce we brush over the skin and meat in the pancake – pairs best with a medium-sweet to sweet wine and whisky, Armagnac or Cognac. But, as we were just three people (and because Philippe Blanc had to conduct a training session after lunch), I brought only three bottles (of wine), the last being one of Australia’s lesser-known but best Bordeaux inspired red. Brown Brothers Patricia Cabernet Sauvignon 2004 has liquorice blue/black fruit, ripe smooth tannins, and finishing freshness. 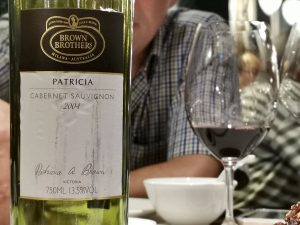