Restaurants at a Glance

Founder/Chef XU Jingye rounded up a few friends and they chipped in to rent a two-storey stone and brick house in a village in Foshan. There are three private dining rooms upstairs. 102 caters to private dining and has a growing following. You have to call ahead but will be rewarded many times over. The young chef is guided by his mentor, Master CHEN Daben, one of the most respected chefs in Guangzhou.

Zhu Rou Po is the name of the restaurant and the nickname of its proprietor. Chinese chefs from around the world continue to visit and find inspiration from owner and restaurant alike. The restaurant is like a little village. There is a big hall where the main restaurant is situated and private rooms in cottages. There is also a meandering pond. Ingredients, vegetables, seafood, etc., are displayed openly as if it were a stall in a market-place.

The founder YEUNG Koon Yat is better known as Ah Yat or “Number One”, the undisputed “Abalone King” of the Chinese culinary world. Considering his name and fame has franchised restaurants in Sydney, Bangkok, Singapore, Kuala Lumpur, Beijing and Shanghai, “Emperor of Abalone” may be a more fitting title than the more parochial king. In Yue or Cantonese culinary circles, Yeung has a status equivalent (and more) to the late Paul Bocuse in French cuisine. He is a giant in the Chinese culinary world.

Hong Kong’s Fook Lam Moon heir Duncan Chui established Guo Fu Lou, which is now located at in the two-storey pavilion adjacent to Cotton Tree Drive and across from the main entrance of The Murray. One of the goals has been to attract a new generation of customers who have not visited the iconic restaurant in Wanchai . Guo Fu Lou serves mouth-watering Cantonese classics and Fook Lam Moon signatures. Duncan Chui – a trained engineer in physics – is grandson of Fook Lam Moon’s founder Chui Fook Chuen.

Sun Fook Kee is the only fine dining Fujianese restaurant in Hong Kong. There are three rooms with a combined capacity of 36. Reservations are practically mandatory although if you walked in and there is a spare table, the staff would not really mind. Sun Fook Kee grew out of Fook Kee. The latter was in another location and from 2011 to 2014, was just one single table catering to private dining. The present restaurant in North Point continued when the previous one closed. 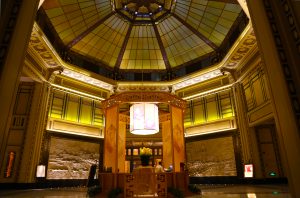 The clientele is almost all local Shanghainese. Friends and families make up the bulk of the customers. That’s a telling sign that Lu Ya serves authentic Shanghainese food. The restaurant is very accessible from downtown Puxi. It’s not so far from the Bund. Lu Ya has fluorescent lighting, and is bright, noisy, very crowded and not the place to go on a date. If, on the other hand, you want to be introduced to Shanghainese fare, you can’t do better.

This was the first Seventh Son restaurant in China. Having said that, some clarification is needed. When it was inaugurated on 1 October 2004, the restaurant was then known as Fook Lam Moon, and represented the first foray into China for the famed Hong Kong gastronomic icon. In 2013, fifth brother Chui Pui Kun and youngest seventh brother Chui Wai Kwan decided to go their separate ways. Elder sibling Chui Pui Kun retained the original Fook Lam Moon in Wanchai and the branch in Tsim Sha Tsui, while the younger Chui Wai Kwan created a new chain called Seventh Son in September 2013.

The Imperial Treasure Group was founded in 2004 by Alfred LEUNG Chi Wai, one of the most entrepreneurial Chinese restaurateurs in the world. Imperial Treasure Shanghai offers much more than Shanghainese cuisine. There are Huaiyang cold dishes (and a top quality Lionhead in a soup or braised), Sichuan classics including Salivating Chicken and Maipo
Doufu, even Yue or Cantonese dishes. Imperial Treasure opened their first London restaurant in December 2018.

Xie He was opened in 1942 during World War II and was then closed during the Cultural Revolution (1966 – 76). Xie He is a two-storey restaurant and a favourite of locals in the know. This oasis of great cuisine is owned and staffed by people with a heartfelt devotion to authentic cooking without fuss or show. The restaurant also offers wild White Fish, one of the three treasures of Lake Taihu. The other two are White Bait and White Shrimps.

One establishment so stands out in the city that it is not uncommon to hear people say that “if you have not visited Yechun, you have not been to Yangzhou”. To give an indication of the numbers that Yechun attracts, each day, 10,000 to 20,000 baos are made. That’s just for a normal day. On festive occasions, the kitchen has to produce up to 50,000 per day! The teahouse traces its origins to the Qing Dynasty (1644 – 1912). Yangzhou was also a favourite destination for Qianlong (1711 – 1799). The Manchu emperor visited the city six times in his southern expeditions.