CH’NG Poh Tiong welcomed guests to the tasting at the Steigenberger Parkhotel Düsseldorf on 17 March 2019.

Tiansai: Please share your life experiences. Do they affect your choices/decision in your life?
Poh Tiong: I learn from my mistakes every day of my life. To try and better myself whether in life or work. I don’t think I am very successful. But, I don’t stop trying.

Tiansai: What kind of personality do you have? How other people comment on you?
Poh Tiong: I am an “argumentative” person. Another way of looking at it would be to say I try to “reason” things out. I try and get to the core of the meaning. So, for example, while most people would praise someone who offers solutions, I withhold my praise until I find out whether the person offering the solutions may had been the one to cause the problem in the first place. Another example would be that I do not judge an angry person to be unreasonable immediately. Maybe she or he is angry because they believed very much in someone or about something and were betrayed. Anger would be a reasonable, even honourable, response. As for other people’s comments about me, I don’t ask nor think about that.

Tiansai: You were a lawyer before working in the wine industry. Why did you choose this industry and why did you quit the industry?
Poh Tiong: Although I trained as a lawyer, I have never practiced as one. Studying the law was not my first choice. In a way, I had no choice. I wanted to study history, philosophy and politics when I applied to university. Unfortunately, the year I applied, they added a regulation that you must have passed science when applying for a Bachelor of Arts degree. I had always failed in science. Although I know the heart has four valves. Left without that option, I chose the law course. But I have no regrets. And, I have never stopped reading and learning about history, politics and the arts (particularly Chinese art). As for philosophy, it’s more important to live it than to read it.

“I started writing poetry when I was 16 or 17. But had no talent. At university, I began writing articles for magazines and newspapers including book reviews, travel and wine.”

Tiansai: What’s the reason of entering wine industry? Were there any stories behind?
Poh Tiong: I regard myself first and foremost as a writer. In this case, I write about wine, specializing in Bordeaux and, to a lesser extent, Champagne. Occasionally I also write about whisky which I love and also cognac. I started writing poetry when I was 16 or 17. But had no talent. At university, I began writing articles for magazines and newspapers including book reviews, travel and wine.

“I don’t consider myself particularly talented but I try to put in the effort. Even if someone were talented, without working hard, that talent would be undiscovered.”

Tiansai: Do you think you are born with the talent needed for working in wine industry?
Poh Tiong: In any industry, hard work is more important than talent. I don’t consider myself particularly talented but I try to put in the effort. Even if someone were talented, without working hard, that talent would be undiscovered.

Tiansai: You have started a wine magazine in the 90’s. After that you become a professional wine publisher. Are there any happy/difficult moments that you can share with us? Any stories that you haven’t told other before?
Poh Tiong: I published The Wine Review in 1991 using the first Apple home computer. I would write a thousand or more words on it and then they would disappear because I had clicked the wrong button on the keyboard. I did not know there was an “Undo” button. It was a long time before I discovered that. Looking back, it was a happy time because being a publisher and writer from home, I did everything myself. Go to the printer, put the magazines in envelopes, place the stamps on, send them to the post office (where I had queued for the stamps), go to the bank, travel different countries of wine with a portable Olivetti Lettera 32 typewriter (I still have it), and taking photos with my Nikon FE2. I used to travel with two camera bodies and three lenses. It’s so much lighter with the Huawei Mate 20 Pro. Tiansai: Since when you have been following Chinese wines and Chinese wine industry
Poh Tiong: I first met Li De Mei in Bordeaux in 2001. I was walking along one of the exhibition halls at Vinexpo and this young man stopped me and introduced himself. We have remained friends since that day. De Mei opened my eyes – and mind – to Chinese wine. Thanks to him, I continue to learn about it every day.

Tiansai: How do you think about the development of Chinese wine market in the past years?
Poh Tiong: I am not based in China so my reply concerns the development of Chinese wine on the international stage. When Jiabeilan Cabernet Sauvignon 2009 won Best Bordeaux Blend in Decanter World Wine Awards 2011, everyone was shocked. That was an historic moment. As the Regional Chair for Asia at DWWA since the competition started in 2004, when I tasted Jiabeilan in 2011, I was immediately impressed by the quality. Another two of the three judges on my panel felt the same way: Frenchman Stephane Soret who is today Director of Wine for Raffles Singapore and Annette Scarfe who became a Master of Wine in 2012. After that success, the best news for Chinese wine today – including Tiansai – is that when a Chinese wine wins Gold Medal or Trophy in an international competition now, no one is surprised anymore. What this means is that the world now accepts that China produces outstanding wine. Tiansai: Being part of the “International Wine Media Group”, you have visited Tiansai in 2013. Was that the first time you know about Tiansai? What was the impression?
Poh Tiong: Visiting Tiansai the first time was like when I first visited the top chateaux in Bordeaux or top producers in Champagne more than 30 years ago. When I came here for the first time, I was struck by the vision and dedication of the people who started the vineyards. Not just the owners who invested financially but the winemakers and workers. Winegrowing and winemaking is like sports. It’s all about teamwork. And commitment.

Tiansai: What do you think about Tiansai’s development in the past decade?
Poh Tiong: A winegrower is a farmer. Except, unlike a lot of other fruits and vegetables, in making wine you only get one chance a year. One harvest for all the other months of hard work you put in. There is a lot of risk and sacrifice involved. I am impressed with the determination and perseverance of everyone at Tiansai. I would like them to know that visiting Tiansai so many times down the years, you continue to make better wines every year. You are improving constantly because you are “listening” to what the vineyard is telling you. I have just one word of caution. Don’t make so many different types of wines. Focus on the very best you can make. Remember that Chateau Haut-Brion – one of the oldest, greatest wines in Bordeaux – only made one red wine since the 15th Century and then added a second wine later in the 19th Century. Life and wine are the same. Focus, focus, focus!

Tiansai: Both Chen Zhong and you are from the legal sector. In fact, a lot of wine lovers or people from the wine industry were also involved in legal sector. Do you think it’s a co-incidence? Or, is there any relationship between the two industries?
Poh Tiong: I cannot speak for other lawyers who are involved in wine whether there is a connection. Although I was trained as a lawyer, I have never practised law. I was a writer even when I was studying at university. Writing is like breathing to me. I have never really done anything else professionally.

“Let’s not turn eating and drinking into something intellectual. It is enjoyable, fun and wonderful.”

Tiansai: What are the reasons behind for publishing 100 Top Chinese Restaurants of the World? What is your opinion on the relationship between Chinese food culture and wine drinking culture?
Poh Tiong: My first glass of wine – more than 40 years ago – was at home and I paired it with Chinese food immediately because I drank it at home. Drinking wine with Chinese cuisine has always been very normal for me. There are at least three reasons I publish 100 Top Chinese Restaurants of the World. I love food. I admire the diversity of Chinese cuisine. Chinese people, we do not respect enough the people who cook our food. I publish my guide because I want to make Chinese cuisine, Chinese chefs and Chinese restaurants better known around the world. The relationship between Chinese food and wine depends entirely on an individual person. If you enjoy them together, just do it. Just like I also enjoy beer, huangjiu, baijiu, whisky and brandy with food, not just Chinese food but other types of cuisine. Let’s not turn eating and drinking into something intellectual. It is enjoyable, fun and wonderful. 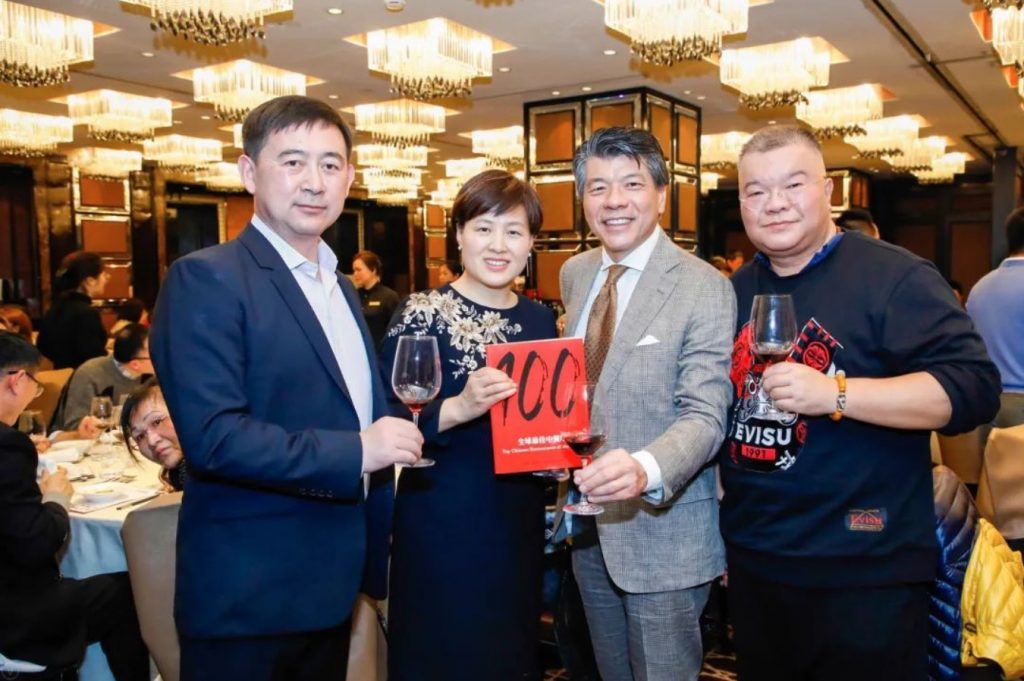 Tiansai:Taste of Chinese Wines in Dusseldorf showcased many Chinese wines including Tiansai. As a MC of the event, what do you think about the event result? What were the comments?
Poh Tiong: Every time we open people’s minds to some thing they are not familiar with or ignorant of, we achieve success. This was what Dusseldorf was all about. Chinese wines travelled more than 7,000 kilometres from their home country and gave influencers, journalists and wine distributors the opportunity to taste them. As a result, these opinion leaders went on to talk about Chinese wines to their readers and consumers. It was a brilliant idea. The comments were very favourable. Some guests ­– already slightly familiar with Chinese wine – were delighted they could taste wines from so many producers in one venue. Others who had never tasted Chinese wines before were astounded by the quality Chinese wines have achieved.

“I love both art and wine. But, if I could take only one thing – a book or a bottle – to an island to live there forever, it would be a book.”

Tiansai: Apart from being a wine & food writer, we know that you also play guqin. What are your hobbies?
Poh Tiong: I play the qin very poorly. And in a very elementary level. My teacher KEE Chee Koon is China’s first Ph D in qin who graduated from China Conservatory of Music. KEE Chee Koon’s teacher is Grand Master WU Wen Guang. My other hobbies are listening to music, reading, boxing and Muay Thai.

Tiansai: What do you think about the influence of art on our daily life? What is the relationship between art and wine?
Poh Tiong: Art is as useful or as useless to us depending on the outlook of that individual person. So, for example, we can be excited when the stock market goes up or/and when we hear our favourite piece of music. The question is this: if you had only one to choose from, which is more important to you? I have, for example, tasted about two dozen 19thcentury Bordeaux and Champagne wines in my work as a journalist. But, they all – even if added together – cannot compare with the time the New York Metropolitan Museum showed me Tang painter Han Gan’s Night Shining White. I love both art and wine. But, if I could take only one thing – a book or a bottle – to an island to live there forever, it would be a book.

Tiansai: What is the upcoming plan in your life and career?
Poh Tiong: I am very opinionated and hot tempered. I hope to be more quiet and calm.